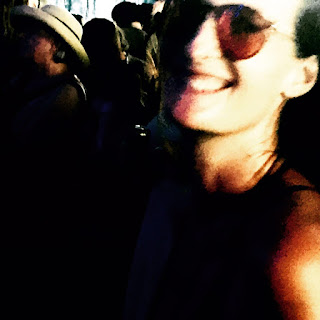 FOR what they’re about to unleash on us, they offer no warning.

Not a word, not even a note, no fingers tripping over the strings of a guitar to smooth our transition from this feverish anticipation for the band from Brooklyn to take the stage into the full 90 minute emotional assault they are about to rain down.

They’ve barely walked on stage before they tear straight into “Sea of Love”, from their sixth studio album “Trouble Will Find Me” which was nominated for a Grammy in 2014.

From the explosive launch into their set, The National offers no respite, sweeping the audience away in wave after soaring wave of the exhilarating, majestic sound they have perfected in their 15 years as recording artists.

Frontman Matt Berninger paces the stage like a man trying to remember, trying to find the words with which to explain himself, before clutching the microphone like it’s his last lifeline and pouring his tender, sombre vocals out against clenched fists.

There are a couple of songs I don’t recognise and I realise that these are among the new music they’re debuting live this year.  Word is the band took the decision to play their new material in live settings first before recording their next album.

From what I heard and what I felt, this album is definitely going to be worth the wait. Their 90 minute set was immaculate. Berninger’s lyrics, so laced with agony, humiliation and lament find their perfect catharsis in the dark, opulent soundscape woven exquisitely together by these musical masters.

The National is entirely in a masterclass all of their own.  Their performance at Bluesfest was nothing short of a revelation. One that as sharp as Bryan Devendorf’s drumming, signalled that this well is deep. I want to swim.
Posted by Unknown at 04:09