On discovering Kaleo at Bluesfest 2016

I’VE just touched down at Byron Bay Bluesfest, set up camp, and am sprinting toward the festival convinced I’m about to miss Lord Huron’s set – one of the band’s on Thursday’s line-up that I definitely  do not want to miss.

I’ve just realised that my Casio is grievously mistaken and it is not, in fact 17:15, but a full hour later here in New South Wales.

I tear into the Delta tent, and come to a gasping halt. Who is that?
The woman standing in front of me, turns around and says “I know, right?”
One thing is certain. I have missed Lord Huron’s set, but my, oh my, who is this? And where did they come from? Iceland. Fucking Iceland.

Yes, these four young dudes who look like they’ve been plucked straight out of 1992, and who have succeeded in striking everyone, including me, glued to the spot and entirely in rapture are from Iceland. As for me, I have died and gone to heaven. 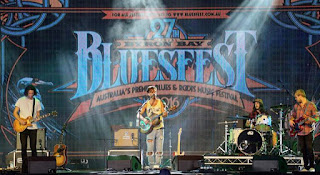 This is what this music festival is all about and as lead singer JJ Júlíusson belts out what he’s been waiting for, I’m nodding my head, knowing that this is exactly what I’ve been waiting for.
They’re just four guys on stage - no horns, no keys, no synths or computerised loops and licks, just good old fashioned, sweet, sweet rock and roll.

Stripped down in the most introspective way, their sound is immaculate. As John Lee Hooker said of Gomez’s debut album, I can find no fault. They do not miss a beat. At once sweaty and growling, the next folded in lament, these guys are completely in sync, completely spell-binding in the blistering blues rock they are laying down on us.

As I’m standing here having the hair follicles on my head rearranged, I offer a silent salute to Led Zepplin and Black Keys, who have no doubt contributed to the banquet I’m feasting on right now. Rubin Pollock’s guitar wails and snarls as the lanky youth bends over it, completely absorbed in the conversation they’re having.

Stumbling across a band this authentic, this raw and this well, damn good is irresistible. I can’t decide which one is more staggering, that they’ve barely been playing together for four years or that they have completely flown under my radar. 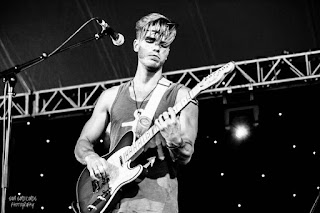 The story goes that JJ Juliusson, drummer David Antonsson Crivello and bassist Danny Jones started playing together as teenagers, having been best mates since elementary school. Rubin Pollock joined the band in 2012 and they recorded their album in six short weeks. They moved to Austin, Texas last year after being signed by Atlantic Records.

All I know is that they’re playing another three shows at the fest and I will not be missing a single one.

(Photos are not mine - they were poached off Kaleo's Facebook page)
Posted by Unknown at 04:20